The Parish Council were delighted to officially open the new play area on Saturday 7th April 2018, which had been funded from the European Agricultural Fund for Rural Development, LEADER funding along with funding from local County Councillors through their Neighbourhood Budgets.

After an opening address by Haswell Parish Council Chairman Chris Hood, the park was blessed by the Vicar of St Paul’s Church, Rev. Anna Brooker, before the ribbon was cut by Mr Liversidge.

Haswell Parish Clerk Kay Tweddle then distributed the good bags provided by Wicksteed to all the children in attendance.

The Members Initiative Fund is an allocation of funds that is made to all elected Members of Durham County Council to support local new and additional community and voluntary projects in their area.

Haswell Parish Council would like to thank Mr Liversidge for committing his Members Initiative Fund (MIF) to the new play area project while he was a county councillor for our area, as well as County Councillor Eunice Huntington and the late Robin Todd MBE. 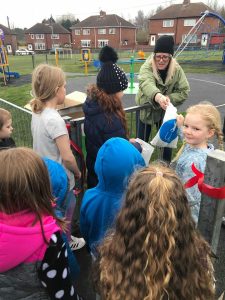 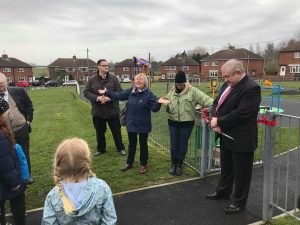 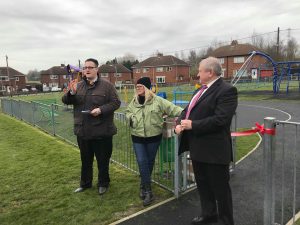 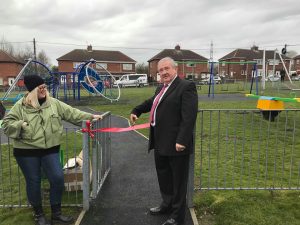 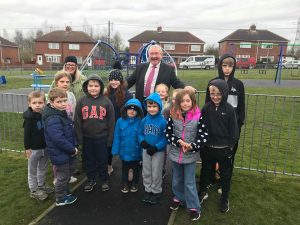 Haswell Parish Council Clerk Kay Tweddle and Alan Liversidge with the children at the official opening of the Windsor Terrace play area.